ASC oral historian Dana Ogo Shew and audio-video specialist Benjamin Sue video-recorded the oral histories of nineteen former and current flower growers and descendants, as well as the Executive Vice President of the California Flower Market. The project created a website "Growing a Community: Pioneers of the Japanese American Floral Industry" featuring oral history clips, an interactive map of Japanese nurseries, and the history of the Japanese American floral industry.

Past projects include a co-operative project with the California Department of Transportation to create Archaeology in San Francisco, California—an interpretive website about the archaeology of 19th century San Francisco based on our excavations and historical research. 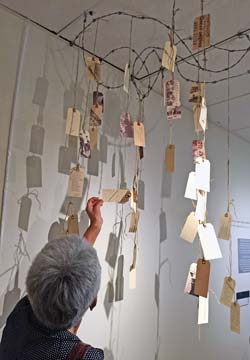 Dana organized an exhibit at the Sonoma State Library Art Gallery, “Creativity Unconfined: Life in a WWII Japanese American Internment Camp,” to highlight the objects that were discovered during the project’s digitization phase, and explored creativity and art in Colorado’s WWII Japanese American incarceration camp. It was open to the public during Fall 2016. The well-attended opening reception featured presentations that included Amache descendants as well as Sonoma State University President Dr. Judy Sakaki.

Inspired by the Amache exihibit, Dr. Sakaki asked the ASC to curate an exhibit that would explore and highlight her family’s internment experience. Dana expanded President Sakaki’s vision and created an exhibit that examined the people and events that have influenced Judy’s life, beginning with her grandparents’ immigration to the United States and ending with her vision for the future of SSU. The exhibit, entitled “I Am Because…,” opened in time for Dr. Sakaki’s investiture ceremony in April 2017 and was on display through 15 December 2017.